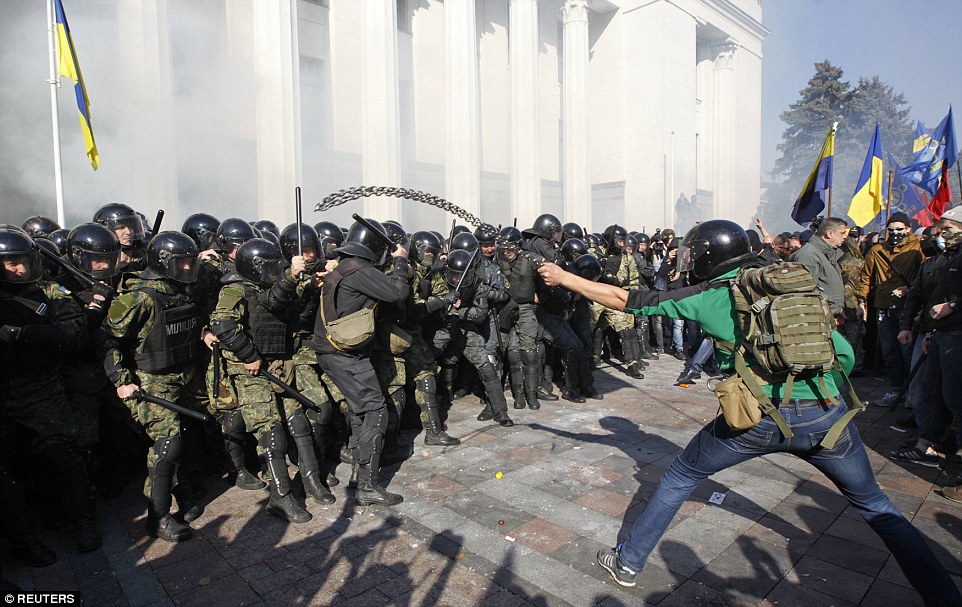 
Employee of the Federal Security Services of the Russian Federation (FSB), Yulia Kharlamova, was seen outside the Presidential administration building in Kiev during the so-called National Guard protests, pretending to be friends of a soldier from the National Guard, and using fake relatives to provoke people in the crowd - according to Podrobnosti. 
Through social media site VKontakte, Kharlamov organized the recruitment of soldiers, preparing them physiologically as provocateurs, for the protest on October 13th.

From fascist to paratrooper 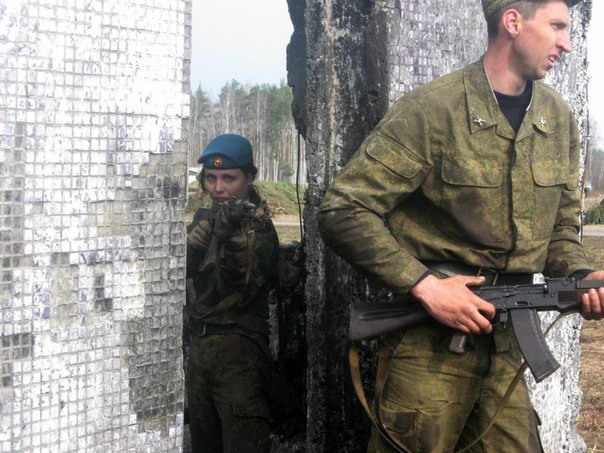 Based on the Muscovites social media profile, 25 year old Yulia Tselinskaya studied at the Lobachevsky University, was married, and has a child. 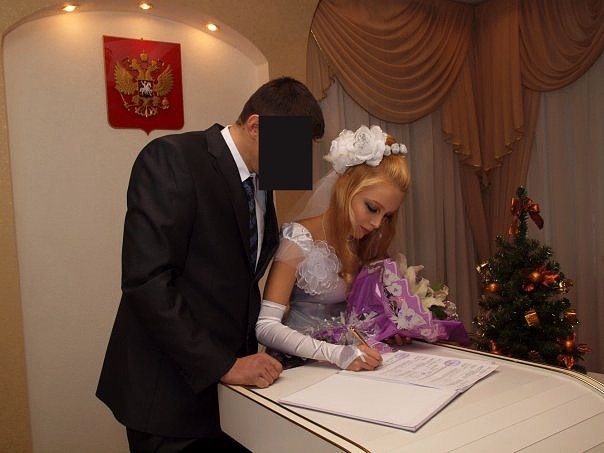 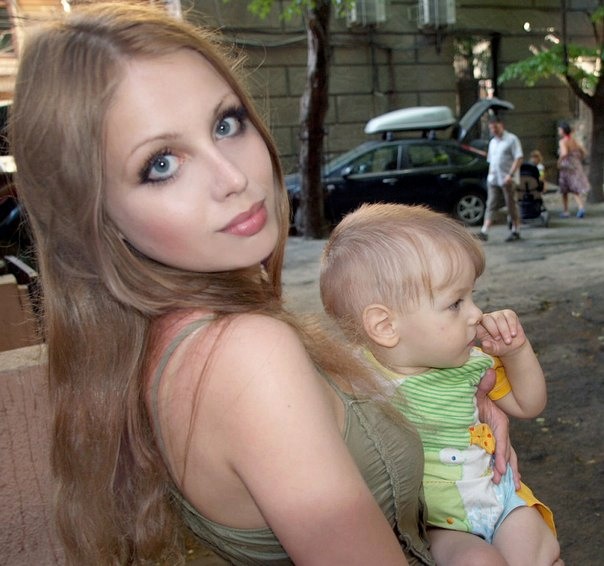 Back in the mid-2000s Yulia met with future terrorists from the Squad “Rusich” - she was fairly well known in Russian nationalist’s circles. Registered under the name "Nordic", she participated in various neo-fascist congresses. 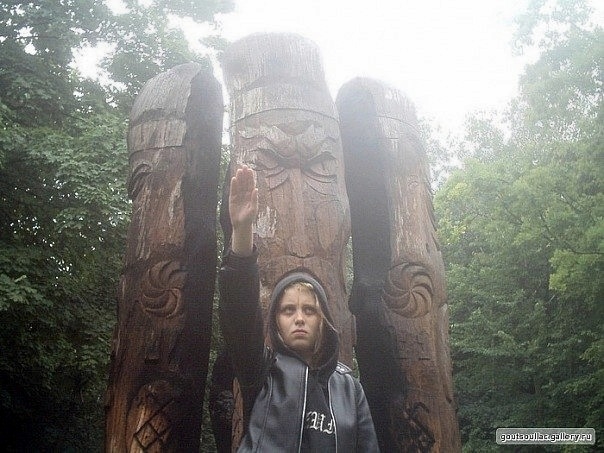 Kharlamova is also a member of the Orthodox-fascist organization with paratrooper orientation "The Lambs of Blue Sky."
Kharlamova-Tselinskaya served under the contract in a special communications regiment of airborne troops of Russia with military unit #54164, Moscow region. In September, 2014 she wrote a letter of resignation.

After Kharlamova resigned the paratrooper reported that she found a new creative job.

"Gone in reserve!) - I’m thankful to the army for many things, it was the best lesson of my life, I learned a lot. I have found a very good civilian job, which opens my creative potential,” - Kharlamov wrote on VKontakte.


From paratrooper to special forces


Now a former Russian paratrooper, Kharlamova works for the FSB. Her page was loaded with stripes, chevrons, and pictures from various military departments. She recently deleted these pictures.
Kharlamova moderates several groups and public pages in social media through which new soldiers were recruited with the focus on internal troops.

One of those – “Demobilization at risk”, that was exactly the place where soldiers were gathered for action near the Presidents Administration on October 13, where three military units showed up at the administration building to demand demobilization. 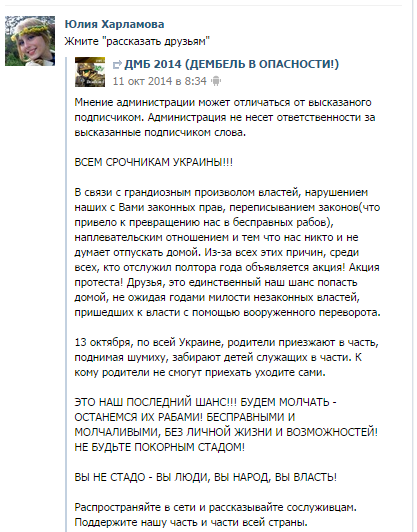 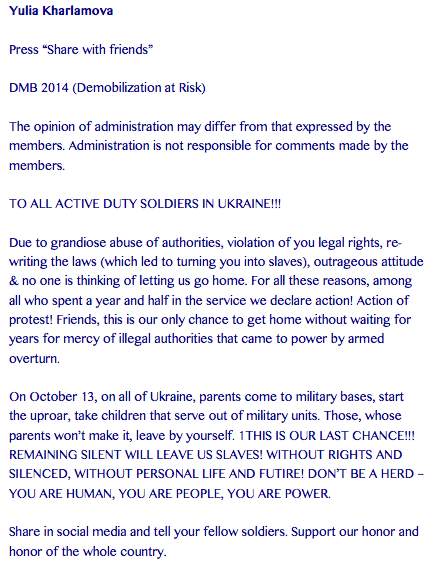 Together with the fake relatives Kharlamova played a role of a girlfriend of one of the soldiers, although it couldn't be understand exactly who.

She aggressively pushed off the journalists and tried to provoke the crowd. “Who are you? What media do you represent? I'm a friend, and came to support the guys, its time for them to demobilize.” – she yelled at the podrobnosti.ua correspondent.

Later they all disappeared together with the mysterious people with hoodies.


After Kharlamova changed her cliche from nazi-fascists to Russian mercenaries, and her husband was replaced by paratrooper (and Spetsnaz GRU soldier) Aleksei Milchakov.
New boyfriend and partner combined, Milchakov, a sadist and animal killer from Saint Petersburg, is known for his cruel torture of POW's from Aidar in the town of Shchstaya.
Yulia loves to share her pictures with Milchakov and record video messages in his defense.

For example, in this video (English translation by War Log) she calls Milchakov a hero and tells about how he rescues dogs during the war in Ukraine.


The pictures of the rescue of dogs by a paratrooper became popular [with sadists]. Here, for example, 14 year old Milchakov posed with the puppy still alive. 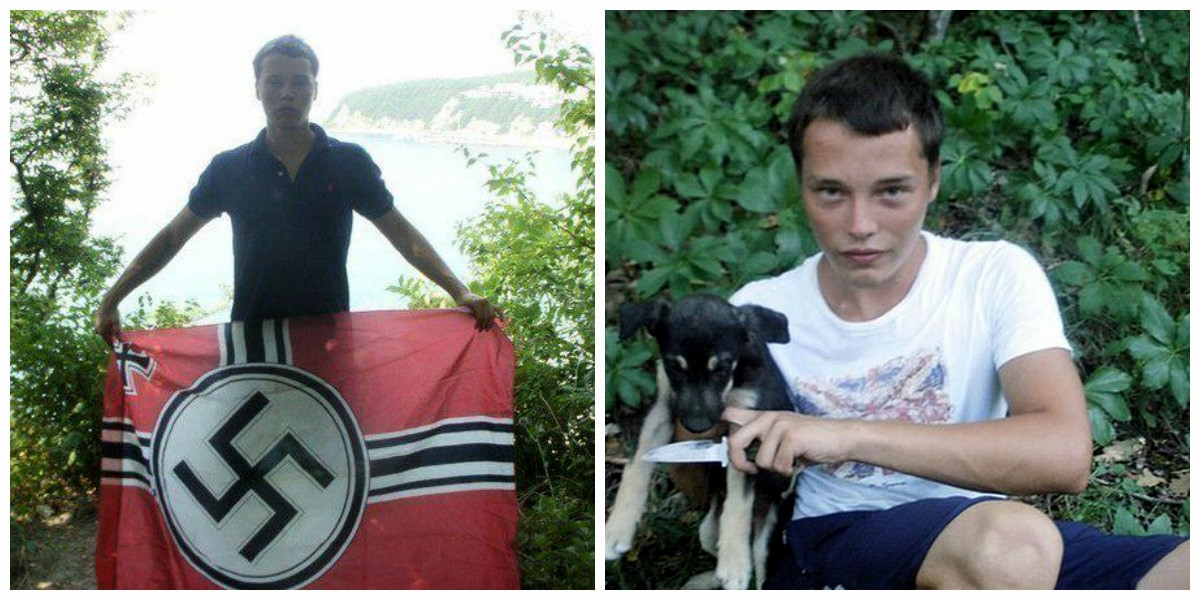 But now, the animal killer stayed to terrorize the population of Lugansk, and Milchakov is recruiting new participants the capital of Ukraine, Kiev, for future Russian spetsnaz operations.

As podrobnosti.ua reported earlier, the riot of the National Guard on Bankova Street was  organised by Russian Special Forces.

The citizens of Kiev and members of volunteer battalions On Bankova Street came to Bankova Street, where 300 national Guard soldiers gathered together to shame the protesters for wanting to go home [desert] during the war.

On Monday evening the road patrol workers reinforced the checkpoints leading into Kiev.

The military prosecutor’s office started a criminal investigation in connection to the meeting of National Guard soldiers near the Presidents Administration.

October 18th: Yulia Kharlamov went on REN TV, a Russian tv channel, and denied she is an FSB agent who organized the violence at Ukraine's Presidential Administration in Kiev. (English translation by War Log):
In another 18th October interview on TVZvezda, a known Russian MoD propaganda media outlet, Kharlamova is painted as an activist, born in Odessa; just visiting friends; and is not a spy, of course. (English translation by War Log)

Kharmalova wrote on her vKontakte page on October 17th:

This is the pro-Russian kp.com report she links to in her post.

On the same day, in light of the allegations made against her, the Muscovite wrote on vKontakte: 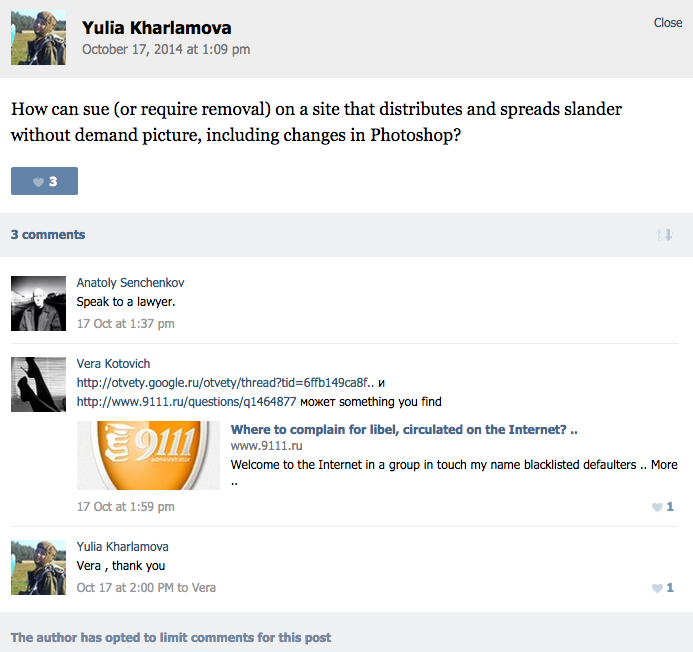 It will be interesting to see whether Yulia Kharlamova actually does sue any publishers after taking legal advice - as her post suggests she might. 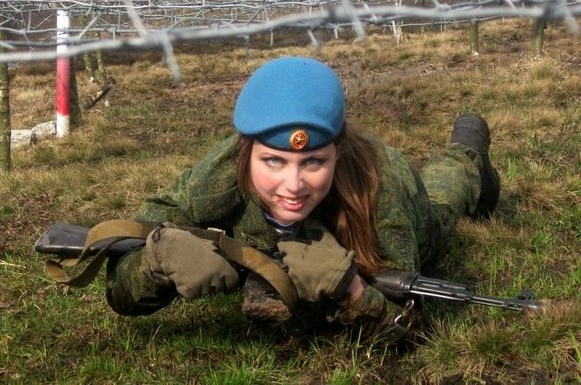 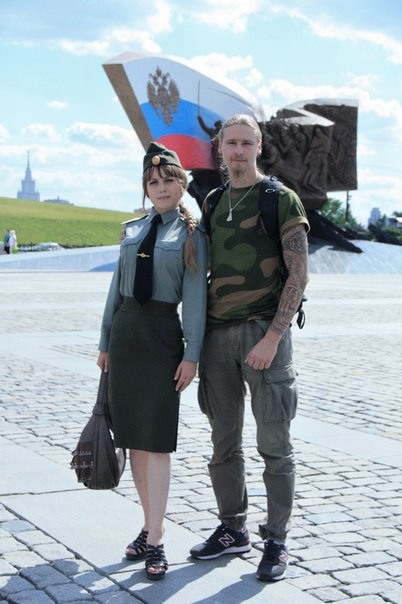 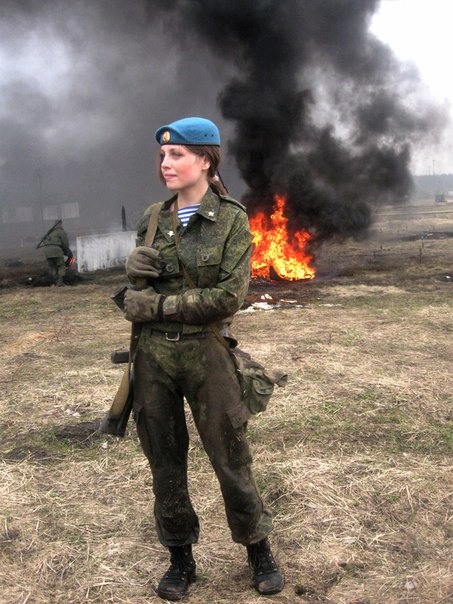 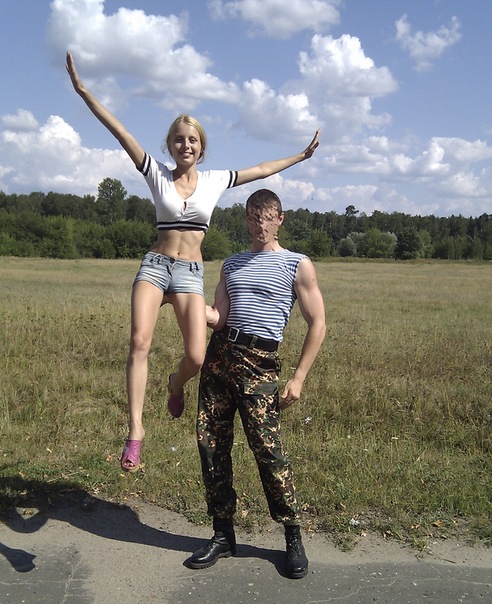 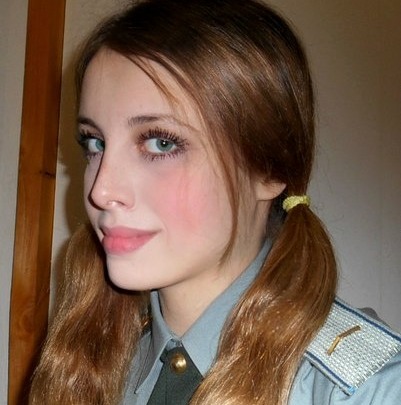 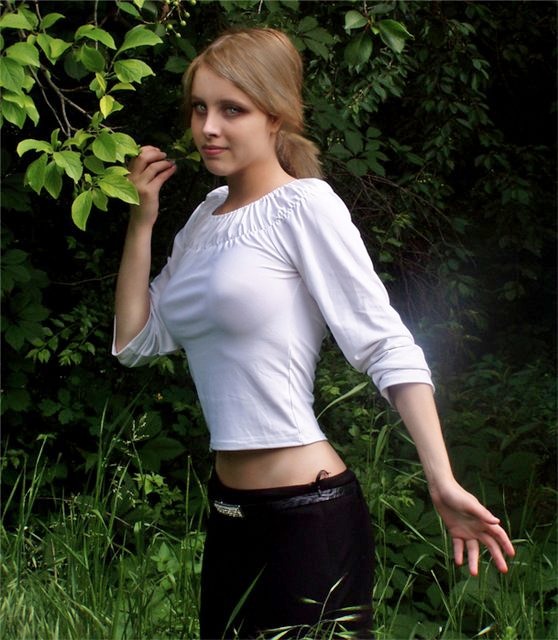 Any abusive comments will ensure your IP is recorded.